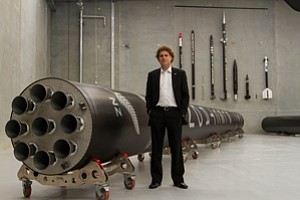 A miniature space race is underway in Los Angeles.

Spurred by predictions that thousands of toaster-size satellites will need launching in the coming years to meet demand for communication and imaging technology, rocket entrepreneurs are chasing what they see as the next big thing in space technology – despite the smaller physical proportions.

“I used to wish I was born in the Apollo era,” said Peter Beck, chief executive of Playa Vista’s Rocket Lab, founded in 2007. “But I think now is the best time to be in the space industry.”

While there are a dozen or so companies that manufacture large rockets or their components in the L.A. area, about four or five firms are locked in on the small-rocket market.

Whereas small satellites have traditionally had to hitch rides on bigger rockets filled with lots of other cargo, these local companies are aiming to build rockets designed to launch the undersize satellites into orbit more precisely – and at a lower cost – than ever before. Los Angeles has become a promising location for this endeavor due to the region’s aerospace talent pool and manufacturing base as well as a large swath of rocket test-firing land in the Mojave Desert.

The need for these tiny satellites is so great that launches are being booked before the rockets have even successfully placed one into orbit.

“The emergence of these new satellites has really kicked off a huge competition for the first company that can provide the first dedicated launcher,” said Randa Milliron, chief executive of rocket and satellite manufacturer Interorbital Systems Corp. of Mojave. “Everybody wants to be first to market.”

For instance, Richard Branson’s spaceflight company, Virgin Galactic – a Virgin Group subsidiary headquartered in Long Beach – landed a contract in June to send 39 small Internet-beaming satellites into space for telecommunications company OneWeb of London. Interorbital and Rocket Lab are penciling in flights, too.

Once the plaything of academic engineers, small satellites – which typically weigh less than 1,100 pounds – are now the subject of heavy focus. Corporations, governments and researchers see them as a way to provide more affordable telecommunications and Earth imaging systems.

For instance, OneWeb aims to replace large telecommunications satellites, which can be the size of a city bus, with a constellation of 720 miniature orbiting satellites that will provide Internet to unconnected regions such as Africa. Several other large corporations have also expressed interest in similar constellations of small satellites.

Hawthorne’s Space Exploration Technologies Corp., known as SpaceX, filed a request for regulatory approval in June to begin testing for a planned constellation of about 4,000 such satellites.

Some satellites are almost unthinkably tiny. Consider CubeSats, which weigh about 3 pounds and measure less than 5 inches on each side.

“At first they were called ‘space vermin,’ ” said Milliron. “But now they’ve gained respect and everybody is using them from corporations to the military to academia.”

At least 118 CubeSats were launched last year, up from just five in 2000, according to a database maintained by Michael Swartwout, an aerospace professor at Saint Louis University in St. Louis. Some 79 percent of CubeSats launched last year are for commercial purposes, rising from just 8 percent in 2012.

And building small satellites is easier and cheaper than ever.

Interorbital even advertises hobbyist satellite kits for as little as $8,000.

The new rockets needed to launch the small satellites also cost less, according to manufacturers.

“One makes a low-cost system by making the system simpler, easier to manufacture, yet robust in its design so that it is reliable,” said Virgin Galactic Chief Operating Officer Barry Matsumori.

While SpaceX has lowered the cost of sending a rocket into space to about $55 million, launches for small satellites would be even cheaper.

Virgin Galactic says that by 2017 it will have a rocket capable of launching a 441-pound payload for a little less than $10 million. The company aims to ignite its rocket from under the wing of an old Boeing 747-400 airliner flying at 35,000 feet, thus saving fuel and the cost of building a first-stage rocket booster.

Rocket Lab aims to launch a 330-pound payload for $4.9 million a trip. The company said its small rocket is almost entirely manufactured with a 3-D printer, which saved development time. In addition, the company’s New Zealand launch site will make it easier to get launch clearance, said Beck.

Interorbital plans to launch an 88-pound payload for just $1 million a trip using a simpler rocket design to save money, said Milliron. Its first commercial launch will take place on an ocean barge in Long Beach next year.

However, this isn’t the first time satellite technology has launched a commercial space race.

In the late 1990s and early 2000s, a number of companies tried to build telecommunication satellite constellations, much like those that OneWeb promises today.

However, the dot-com bubble left behind a glut of cheap fiber-optic bandwidth back down on Earth, so those companies went bankrupt. With a smaller than expected commercial satellite market, big players Boeing Co. of Chicago and Lockheed Martin Corp. of Bethesda, Md., were forced to merge their satellite launch operations into joint venture United Launch Alliance of Centennial, Colo., in 2006.

Notably, commercial satellite constellations proposed last year by Alphabet Inc. subsidiary Google, Facebook Inc. and SpaceX, which would have spurred the launch of thousands of payloads, were shelved or postponed in recent months.

And terrestrial options – such as cell towers – could still be cheaper.

“From a technical perspective, this could get done,” said SpaceX President Gwynne Shotwell regarding the small satellite market at an October conference. “But can we develop the technology and roll it out with a lower-cost methodology so that we can beat the prices of existing providers like Comcast and Time Warner and other people? It’s not clear that the business case will work.”

Saint Louis University’s Swartwout added that rocket companies might not have the resources – or patience – to develop new technology, which often requires lots of trial and error.

“If you want to make a small fortune in aerospace, start with a large fortune,” said Swartwout. “It always takes more money, more time and more tech than people believe.”

Ultimately, the U.S. government could wind up being the best business partner for smaller rocket manufacturers in the same way it has been for larger companies such as SpaceX and United Launch Alliance.

The federal government is estimated to have spent $39 billion on space activities in 2013, according to a study by the Organization for Economic Co-operation and Development.

“Our government spends more money on space than all the governments of all the world together,” said Millennial’s Dubyn. “These startups will have to recognize after a while that if they want to make a viable space business, then they need the U.S. government as a customer.”