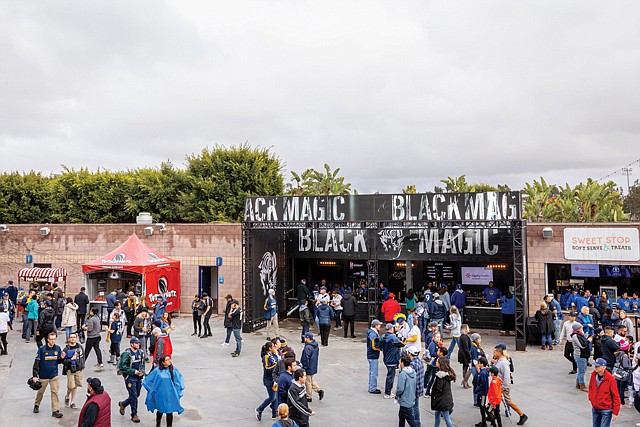 The Los Angeles Galaxy and Dignity Health Sports Park have agreed to a multiyear sponsorship deal with Santa Monica-based El Silencio Holdings Inc. in a partnership the team is calling the first of its kind.

“We look forward to elevating the game day experience and adding value to our fans with their topnotch mezcal offerings,” said Robert Vartan, senior director of AEG Global Partnerships, in a statement.

As part of the deal, the Galaxy’s 27,000-seat stadium will now house a bar on the main concourse dubbed Mezcaleria El Silencio and a hidden speakeasy in another part of the park. The brand’s signage will be posted throughout the stadium as well as AEG’s music venues.

El Silencio Chief Executive Fausto Zapata said in a statement, “You can expect to experience the brand in a way that truly goes beyond the bottle and beyond your wildest and most outrageous imagination.”

“Ultimately, we believe this technology powered by AWS will drive a revolution in the broadcast experience … so that fans can watch their game, their way,” Scott Sonnenberg, the head of global partnerships for the Clippers, said in a statement.

Once they’ve tested out AWS’s software, the team and Second Spectrum plan to use AWS services to create new in-game features for viewers. Second Spectrum has cameras that gather three-dimensional views of the game play in every NBA arena. Using cloud-based analytics, the technology can overlay images and graphics during the game’s livestream, giving fans an enhanced game-watching experience.

The Clippers said they also plan to use Amazon SageMaker, another technology, to potentially develop more statistics to be featured on Clippers CourtVision and post-game clips.

The agency announced it signed Olivia Moultrie to its ledger as the young phenom pursues playing professional soccer. Moultrie becomes the youngest female soccer player to forgo her collegiate eligibility, according to the New York Times.

Financials of the deal were not disclosed, but Spencer Wadsworth, Wasserman’s vice president of global soccer, said it will exceed the amount of money that a four-year scholarship at a top college would cost.

Wadsworth will represent the budding star in on- and off-field activities. “Olivia is an incredible talent, exceptionally bright and laser-focused on her goals,” he said. “We are proud to support Olivia in her ambitions … and look forward to helping her navigate through what promises to be a long and successful career.”

Since signing with the agency, Moultrie has inked an endorsement deal with Nike Inc. and is included in a new Nike advertising campaign entitled “Dream Crazier.”