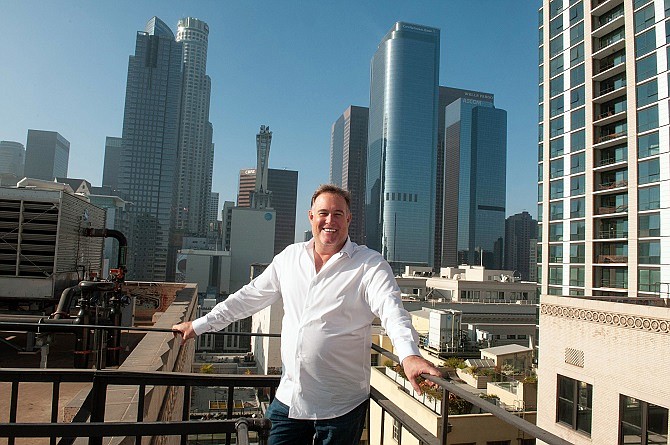 Chris Rising at The Trust Building with One Cal in the background.

In January, Christopher Rising, son of veteran developer Nelson Rising, became the company’s chief executive after serving as president. The elder Rising led the company from 2011 until the beginning of this year. Nelson Rising remains with the company as chairman and serves on its investment committee.

Christopher Rising sat down with the Business Journal to talk about learning from his father, the company’s expansion into new markets, impact investing, moving toward a fund business and betting big on downtown.

You’re big on impact investing — the idea of investing with the goal of positive change while also generating financial gains. Can you explain how that plays into your strategy?

When my father and I started the company, we asked ourselves, “If we were going to start a real estate company today, what would you do?” We came to the conclusion early on that you would build a backbone around technology. We really tried to build a firm that is paperless — using software and using technology in a way that’s really a force multiplier for us. And that has also translated into our buildings. Because of that, we have been able to do things today that weren’t possible before as it relates to owning, managing and investing in buildings.

Did you always want to follow in your dad’s real estate industry footsteps?

No, it was not the plan. If the plan had gone right, I’d be starring in movies or producing them. Real estate was not the be-all, end-all for me. I did go to law school after I taught high school.

What convinced you to change fields?

I got interested in real estate because of the deal side of it, not because of the technical side. Working for John Cushman opened my eyes to all the things that can be done in real estate. I was fortunate out of that period of time when my dad sold (development company) Catellus for it to come together. It was in my mid-30s; it was not in my 20s coming out of school.

What was your early career path?

My first job was at Loyola High School, teaching U.S. history and Western Civ and coaching football. My real introduction in real estate was, I went to Loyola Law School and then I worked for Mike Meyer, who is a well-known leasing attorney, and John Whitaker, who is a well-known transaction attorney. Out of that, I got the opportunity to work for John Cushman. John had a role in what was called the Office of the President that was really for a young lawyer who wanted to move into brokerage. The person before me was Lyn Williams, who is a very, very accomplished broker in town. When Lyn moved on her own, I started working with John in that role. It opened up the world of real estate to me.

Why did you decide to strike out on your own?

After about four or five years, I decided I didn’t want to be a broker. I wanted to be a principal, and I started my own company in 2003. My father and I partnered up much later. I had already raised money and done deals and had a track record.

It was harder when we were in a public environment. There were more eyes on you and more people wanting to see you fail. It’s been wonderful since we started Rising Realty Partners. 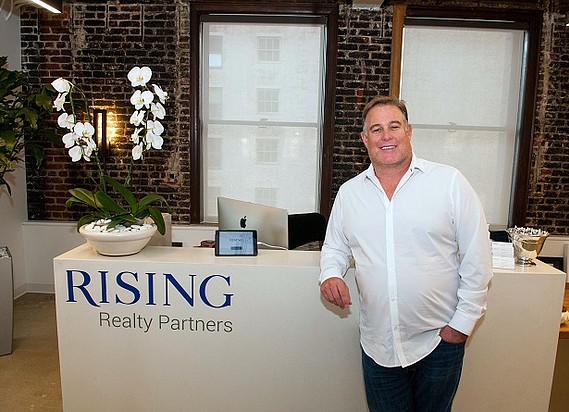 Now that you’re CEO, what’s your vision for Rising Realty?

We’ve traditionally done deals as a general partner and bringing in (limited partnerships). We’d like to get more into the business of controlling our own capital. We’re moving more toward a fund business. We think these strategies around impact are quite unique, and we think people will be interested in them. I think it’s moving — it’s growing from a local operator model to a more regional player.

Why bet big on downtown?

We believe in (central business districts). We really believe that downtowns have a place in society that is only going to get bigger. We really believe in the investment that the county and city have made in infrastructure. I think the Los Angeles of 2028 is going to be radically different than the Los Angeles of 1978. This will be a public infrastructure city, and people can take public transportation and can take options to solve the last-mile issue. And we really think downtown L.A. is the center of that.

Why focus on repositioning historic buildings versus ground-up construction?

We have had some great success with historic buildings. Our focus is really on adaptive reuse. Our view is that the greatest impact we can have is doing value-add adaptive reuse. By their nature, these buildings are in great locations. We can have a bigger impact because it does take a skillset that’s different than ground-up, and we can do better for our investors by doing adaptive reuse than we can doing ground-up.

Rising Realty is investing in cities like Denver, Salt Lake City and Seattle. What’s the appeal of investments outside Los Angeles?

The nine markets we’re in, the reason we’re in them is they all have a strong millennial population. They all have a younger population which is bigger than the baby boomers. They have great university and college systems, so you’re having very smart, educated workers. You have investment on the public side as well as the private side ... and there is a strong conservation bent in all of these markets.

What kind of rewards do these markets offer?

As we grow from a small, local operator into more of a regional operator, we think these nine markets are the ones that have the most growth. If you look historically over the last 15 years, investment in real estate in the western U.S. is about 15% higher in global returns than in the Eastern U.S.

Have concerns of a potential recession altered the way you do business?

Trees don’t grow to the sky. This too shall end. The best way to get through a slowdown or a recession is not to be overleveraged — to make sure all of our projects can sustain a slowdown in leasing or a reduction in our occupancy. Having said that, there is nothing that I can point to right now that is such a canary in the coal mine that I think a recession is coming. We see some good buying opportunities. They are less and less. We think that, if there is a hiccup, that might provide more opportunity for us.