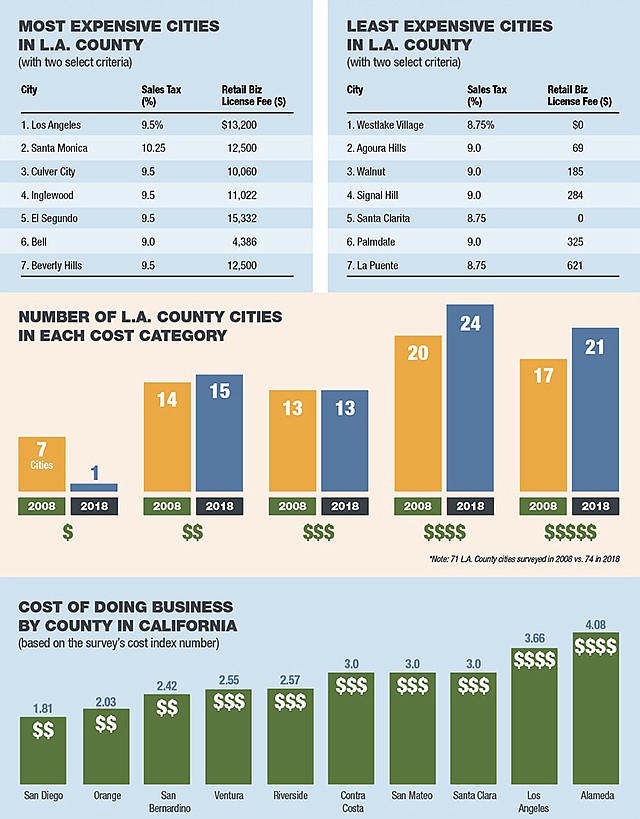 Municipal fees and taxes paid by businesses in Los Angeles County are getting ever more costly, according to the latest Cost of Doing Business Survey from Kosmont Cos. and the Rose Institute of State and Local Government at Claremont McKenna College.

The annual Cost of Doing Business Survey, which is set to be released this week, ranks 307 municipalities in nine Western states including California. The study prices out 19 different fees and taxes in place in 2018 that the jurisdictions levy on businesses.

The survey was started by economic development consultant Larry Kosmont in the mid-1990s as a tool for companies to compare municipal taxes and fees throughout Southern California.

“Los Angeles County remains an expensive area to do business in, in part because of its high sales taxes and utility user taxes,” survey authors Kosmont and Andrew Busch said in their report. Kosmont is chief executive of Kosmont Cos., a Manhattan Beach-based economic development consulting firm; Busch is director of the Rose Institute.

Los Angeles once again tops the list of costliest cities in L.A. County in terms of taxes and fees levied on business as it has for most of the 23 years the survey has been conducted.

That compares with annual business license fees in the hundreds of dollars for businesses in cities such as Palmdale and Signal Hill, and no business taxes at all in Westlake Village and Santa Clarita.

Los Angeles also has an electricity use tax of 12.5%, one of the highest in the county.

Only one city — Westlake Village — was classified as “very low cost.” It borders Ventura County where taxes and fees on business are substantially lower.

“Right now, thanks to Proposition 13, property taxes paid by businesses in California are relatively low compared to other Western states, which has helped offset some of the higher costs of other taxes and fees,” Kosmont said.

“If this split roll tax measure passes, that will change. It may prove to be a watershed moment for low-margin businesses as to whether they choose to remain in Los Angeles County, move out of state or close up shop.”