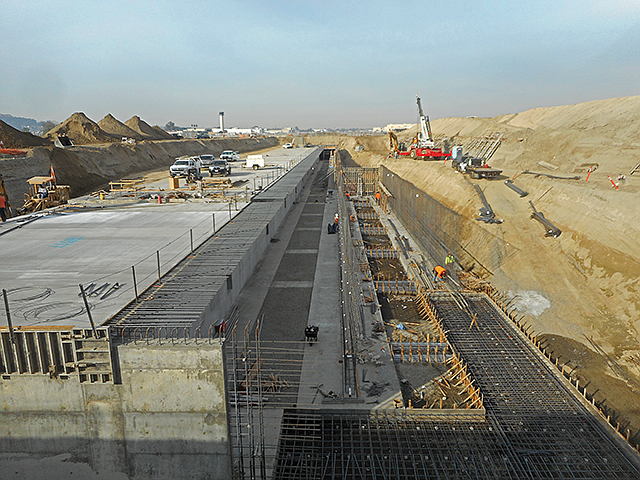 Baldwin Park-based contractor Mike Bubalo Construction Co. Inc. is nearing completion on what’s being billed as the first in a new generation of stormwater projects in Los Angeles County that aim to convert runoff into potable water.

The $20 million Los Cerritos Channel project in south Long Beach will collect water from streets, parking lots and other surfaces in Long Beach and Signal Hill, funneling the liquid into a cistern where it will be treated to be reused for drinking and other household purposes.

When running at full capacity, up to 134 acre feet of water can be stored for future drinking and household use. An acre foot is roughly equivalent to the amount of water in an eight-lane, 80-foot-long swimming pool, or enough water for four households for one year.

The project was initially expected to be about half its current size. But as work progressed, funding for the project doubled to $20 million, thanks to new allocations from the Los Angeles County Public Works Department and the California Transportation Department, according to Dave Sorem, owner and vice president of Mike Bubalo Construction.

Sorem, who is also chairman of the Southern California Partnership for Jobs, said the project was expected to be completed on or around Oct. 1.

Another challenge he cited was keeping construction equipment under a height restriction imposed by the Federal Aviation Administration because of the project’s proximity to Long Beach Airport runways. The project is located on the south side of the airport.

In addition, Sorem said, the unusually wet winter earlier this year meant weeks of delays. “We were working down 30 to 40 feet below ground level, so whenever it rained, it slowed us down a bit.”

At any given point in time, Sorem said, roughly 20 people from Mike Bubalo Construction and its subcontractors were working on the project.