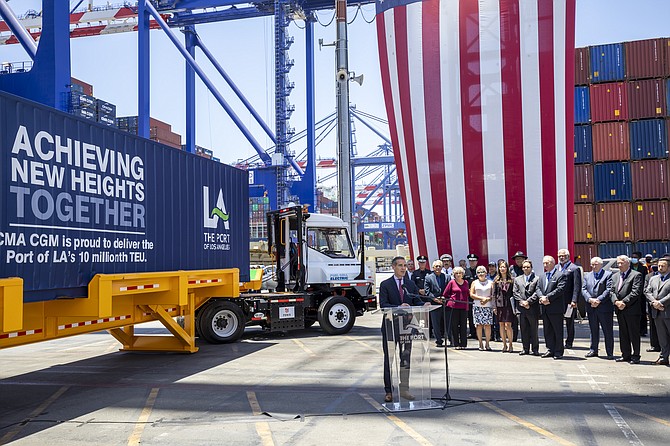 Los Angeles Mayor Eric Garcetti speaks at the Port of L.A. on June 10.

There’s a silver lining to the months-long traffic congestion at the San Pedro Bay complex.

Dockworkers and terminal operators at the Port of Los Angeles on June 10 celebrated a major milestone: processing 10 million container units of cargo in a 12‑month period.

“Each one of these 10 million boxes represents jobs and economic prosperity for not only the Harbor Area but the entire Southern California region,” Los Angeles City Councilman Joe Buscaino, whose 15th District includes the port, said in a statement. “I salute all the waterfront workers who work tirelessly to move all this cargo, particularly the men and women of the International Longshore and Warehouse Union.”

“What we’ve collectively achieved today is a result of the incredibly hard work and perseverance of many,” Port Executive Director Gene Seroka said in a statement. “With our sustained focus on supply chain digitalization, infrastructure investments and strong business relationships, we have the opportunity to build on this historic milestone.”

Garcetti, in a statement, referred to the port as the “the beating heart of our economy, the backbone of our region’s prosperity, and the crossroads that makes Los Angeles a true gateway to the rest of the world."

"Reaching this remarkable milestone is a reflection of its role as a critical engine of the global supply chain — and a testament to our unmatched port infrastructure and highly skilled workforce," the mayor added.

Over the past 12 months, the port's seven terminals on average have collectively processed 15 container ships a day, up from 10 ships in 2019. Meanwhile longshore labor shifts increased nearly 20% in 2021 compared to the average weekly shift count over the past four years. The total cargo volume will likely rise to 10.8 million TEUs by the time the port ends its fiscal year on June 30.