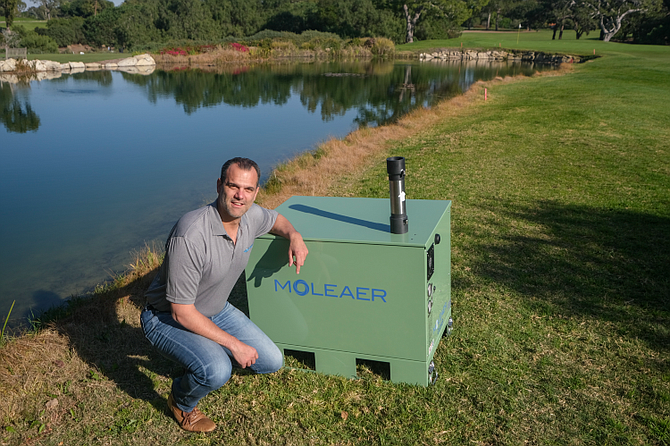 But no one at Moleaer (pronounced like the French playwright Molière) ever expected their highest-profile project to be in the company’s own backyard, in a channel less than a half-mile from its headquarters.

The Dominguez Channel was where, in early October, a foul stench — described as the smell of rotten eggs — started continuously wafting into the air, prompting health complaints from thousands of nearby residents and substantial coverage from local news media.

“Our own employees were reporting smelling the odor as they were working,” said Nicholas Dyner, Moleaer’s chief executive.

Air quality and other officials quickly traced the odor to excess levels of hydrogen sulfide gas in the channel. By mid-October, the Los Angeles County Department of Public Works began injecting an odor neutralizer and then called on Moleaer to apply its new technology to increase oxygen concentrations in the water, which in turn creates less favorable conditions for the spread of hydrogen sulfide gas. That technology, known as nanobubble generation, produces microscopic gas bubbles that can stay suspended in water for long periods of time.

“We started treating the channel within 72 hours,” Dyner said. “We had 60 million gallons per day recirculating through our 14 nanobubble units, putting nanobubbles into the channel. That was a huge treatment capacity.”

Moleaer’s technology — in combination with the odor neutralizer — worked: Within three weeks, odor complaints dropped off dramatically, and by Thanksgiving, the crisis was mostly over.For Moleaer, the Dominguez Channel project was both the largest-scale and highest-profile deployment of its nanobubble technology, which it has been honing over the last five years. Development of the technology was inspired by a problem one of the company’s co-founders had in a previous position when trying to get bacteria to treat wastewater more effectively. That co-founder, Warren Russell, had been running a business that sold these bacteria to the operators of wastewater treatment plants.

But, according to Dyner, Russell encountered a challenge: The bacteria did not perform well in shallow, warm wastewater treatment pools because they were overwhelmed by other bacteria that create algae and take up oxygen from the water. So, in early 2017, Russell turned to an acquaintance, Bruce Scholten, who had decades of experience dealing with the various chemicals used in wastewater treatment. Scholten had been experimenting in the new field of nanobubble aeration, trying to apply it to the aeration of wastewater.

Traditional-sized aeration bubbles tend to rise to the surface within seconds or minutes — think of an aeration device in an aquarium. As a result, most of the oxygen they contain is released directly into the atmosphere, doing little to add to the oxygen concentration in the water.

“With this conventional technology, you can only aerate at one point before the oxygen vanishes into the air,” said Michael Stenstrom, distinguished professor of civil and environmental engineering at UCLA and an expert on wastewater treatment systems. Stenstrom has acted as a paid adviser to Moleaer but is not currently serving in that capacity.

But because of their microscopic size — less than 0.04% the size of a grain of salt — nanobubbles stay suspended in water or other liquids for days or even weeks, allowing much more time for the oxygen they contain to disperse into the surrounding body of water, Stenstrom said.

With higher oxygen levels, conditions in the water are less favorable to the creation of algae and other harmful compounds.

But until very recently, Stenstrom said, it has been difficult to create nanobubbles outside of a laboratory and on a scale large enough to treat sizeable bodies of water.

According to Dyner, Scholten developed a technique of shearing off bubbles as they form, keeping their size in check and thereby creating nanobubbles. This patented technology allows for the scaling up of nanobubble generation.

After solving the immediate problem of aerating warm shallow bodies of water, Scholten and Russell decided in early 2017 to form Moleaer to attempt to commercialize the technology and apply it to a broader range of industries.

Dyner, a water treatment industry veteran, was one of the early investors, and he soon joined the fledgling company as its chief executive. Scholten became the chief technology officer and Russell the chief commercial officer.Since its founding, Moleaer has attracted about $20 million in investments from venture capital and other investment funds. That funding has allowed Moleaer to further develop its technology and expand its reach both geographically and into the agricultural and manufacturing sectors.

In situations where water is used to irrigate crops, nanobubbles like those produced by Moleaer’s devices allow more oxygen to penetrate into the crop roots, significantly boosting crop productivity.

One agricultural client is Charlottesville, Va.-based Schuyler Greens Co., which grows vegetable and produce crops in a large greenhouse. John McMahon, owner and farm manager, had been looking for ways to cut costs and realized that the mechanical aeration system he was using was not very efficient in keeping oxygen levels high enough in the irrigation water. It also relied on a huge cooling system to keep the water from getting so warm as to cut off the supply of oxygen. He heard about Moleaer’s technology and decided to give it a try, ordering up two of Moleaer’s nanobubble generating units.

“The first thing I noticed is that it kept the oxygen levels high even in warm conditions, which eliminated the need for those coolers and saved us a ton on power costs,” McMahon said. “Then, with the higher oxygen levels, the arugula plants started growing faster, shortening the time to harvest. That, in turn, allowed for more arugula crops per year.”

McMahon said he briefly encountered an unexpected problem as he started using the nanobubble generators: They created too much oxygen, way beyond the necessary concentrations.

“I realized that I was keeping the valves fully open, allowing for too much air,” he said. After a few weeks, he found the right balance, and things went more smoothly.
On the manufacturing side, a brewery in Cloverdale has also been using Moleaer’s nanobubble generators to pretreat wastewater before it’s discharged from the plant premises.

According to Peter Kruger, chief operating officer for craft beer manufacturer Bear Republic Brewing Co. Inc., traditional membrane-based aeration systems use huge blowers to try to inject more air into the wastewater that can be absorbed by bacteria. But only about 15% to 20% of the air actually makes it into the wastewater, resulting in a significant waste of electricity.

“Moleaer’s nanobubble blowers boost the oxygen levels high enough so that we don’t have to run the huge blowers,” Kruger said. “That alone saves us $20,000 a year in electricity costs. And the wastewater more consistently meets the pretreatment standards, so we don’t have to hold up the process to deal more with that wastewater.”

Up until now, one of the biggest challenges for Moleaer and the handful of other companies working on nanobubble technologies is convincing conservative operators of wastewater treatment plants to consider the new technology, according to UCLA’s Stenstrom.

“Treatment plant operators are OK with incremental improvements in existing technologies, but accepting a whole new technology like this is another matter for many,” he said.

But Dyner said the company’s recent high-profile experience in the Dominguez Channel just might change that calculus.

“This is the project that the company is most proud of,” he said. “It showed that under such extreme time pressure, we could do such a large-scale deployment.”