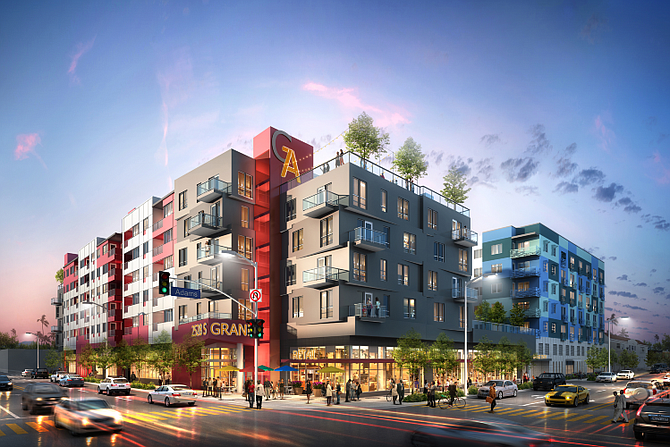 Century City-based multifamily developer Cityview has been expanding rapidly despite the pandemic. By pursuing development projects and acquisitions, the company has grown to $2.5 billion in assets under management.

Sean Burton, chief executive of Cityview, said the company has grown roughly tenfold since the Great Recession and now has a team of about 130 employees.
Currently, the company has almost 2 million square feet of multifamily projects in planning or under construction.

Greg Harris, an executive managing director at Marcus & Millichap Inc., has been working with Cityview for roughly 20 years.
“They are not as well-known as some of the other merchant build companies in L.A. or Southern California, but if you look at the quality of the product they build and the number of projects they’ve built, they’re the most successful but least known developer of Southern California,” he said. “They’ve built a ton of very marquee, leading-edge new buildings.”

“They are known for being best-in-class developers but aren’t as well-known as some of the other big names. They’ve built this massive business under the radar,” he added.

Earlier this month, Cityview, along with partner Stockbridge Capital Group, announced that they acquired South Bay X in Gardena for an undisclosed sum. The site has 265 planned apartment units and is expected to be completed in early 2025.
It is the first joint venture between the two companies.

“We’re really excited about delivering. There’s almost no new competition in the area and no new supply in the area and there’s a lot of really great jobs there,” he added.
And last year, Cityview and New York-based Clarion Partners acquired a 276-unit multifamily property in Burbank known as Empire Landing for $161 million. The companies plan to upgrade the property.

“Burbank is a great market,” Burton said. “It’s one of the hottest office markets in the country, and there are a lot of great jobs there. We’ve been trying to do a deal in Burbank for a while and really like Empire Landing. We’re really excited about that, and I wish there were more deals in Burbank.”

Kitty Wallace, an executive vice president at Colliers focusing on multifamily assets, said she was continuing to see a lot of interest in multifamily properties in L.A., calling it and industrial “the two product types that are most in demand.”

Cityview has always focused on workforce housing, something Burton said will continue.

The company was founded in 2003 and, according to Burton, has become one of the biggest developers of ground-up workforce housing. Cityview, as its name would suggest, also focuses on cities.

“Our thesis from the beginning is we thought there would be a movement back toward cities and more suburban areas. We like to build or buy near jobs. That’s the first thing we look at,” Burton said of where the company does its projects.

Cityview, he said, is focused on the “western half of the country” in cities with strong job growth.
“We’re looking for submarkets or locations within those border markets that are well located near transportation, near culture, near nightlife and everything that’s going on in a metropolitan area, and then we have to make sure we are designing something that is efficient,” Burton said.

That means no high-rises. The company sticks to buildings that are five stories or fewer because Burton said those projects have lower construction costs.
Cityview also builds smaller units than some of its competitors and instead focuses on “great amenity spaces,” Burton said, as a way to further save on costs and appeal to millennial renters.

The company manages institutional capital using the money to invest in its own projects and does not give money to third parties, he said.
Harris called new development “critical to the growth of California” adding that Cityview has successfully found well-located land and gotten projects approved in areas that have traditionally been tricky to develop in.

The company also is in “heavy acquisition mode,” according to Burton. That means both land for new development as well as existing properties to renovate.
But Burton said deals aren’t always easy as capital fights for prime real estate.
“It’s a competitive market,” he said. “The markets we’re in are attractive, and there’s a lot of capital that wants to invest in the markets.”

He said as Cityview’s reputation has grown, more sellers have come to the company with deals that haven’t been listed, allowing it to acquire the properties off-market.
Harris added that buying off-market can be advantageous because the site stays off the radar of opponents of new development.

Markets Cityview is interested in now include Southern California, the East Bay, Denver and Phoenix.
The company does everything from its Century City headquarters instead of from a number of satellite offices.

“We made a decision that we would have everyone here in the office and people would get on the plane, if necessary,” Burton said.

Burton said that during the pandemic, the company has been in the office part-time.
Covid-19 caused some issues for the company to address. One of the first was how to lease virtually.
Burton said the company worked to come up with tools to do so and continues to do some virtual leasing now in addition to in-person leasing.

Rent collections and occupancy rates, he said, are almost at pre-pandemic levels, in the high 90s, throughout the company’s portfolio.
On the development side, Burton said there have been some supply chain disruptions, so the company has had to plan out how it will get materials in order to “stay ahead of the curve.”

Looking forward, Burton sees another busy year for the company.
“You’re going to see us continue to grow pretty significantly,” Burton said. “We have some new platform relationships we’ve been planning on putting in place, and I expect those to allow us to continue to expand.”

California, he added, “desperately needs more housing,” something the company is continuing to address. Wallace expects investor interest in Los Angeles to continue.
“The Los Angeles market is poised over the next couple of years to outperform some of these other pockets,” Wallace said.

For now, Cityview is focused on the western half of the United States, but Burton said the company could go into new markets with strong demand and weak supply.
And the company is also going to continue to do some work outside its strong suit of multifamily housing. Today, the company’s portfolio is 90% multifamily product with some industrial as well.

“We do (industrial) in markets where it makes sense,” Burton said.