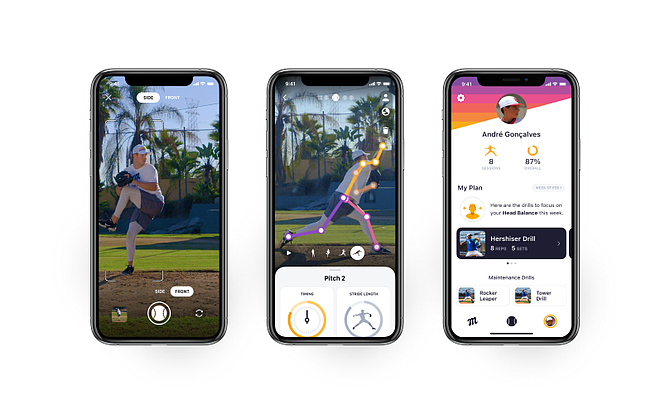 Millions of kids around the world participate in youth sports, but few have access to personalized instruction from professional coaches.
That’s something Silver Lake-based startup QualiaOS Inc., doing business as Mustard, is seeking to change.

The company is the developer of a mobile app that uses proprietary motion analysis technology to review game and practice footage submitted by budding athletes. After gathering data on form and technique, the app automatically provides users with feedback and training recommendations.

Chief Executive Rocky Collis said the guidance offered to the app’s users are largely drawn from the insights of company co-founder Tom House, a longtime baseball pitching coach who has also worked with an extensive list of star football quarterbacks.

“Working with Tom, we’ve identified what we call the ‘teachables,’” said Collis. “What are the mechanical flaws at different ages that are both important and correctable? What are the body movements and positions you can actually train someone to do differently?”

Collis said this type of guidance is fairly straightforward, but it’s not always available to young players who don’t have the benefit of working with highly paid coaches and trainers.

“We go through a very scientific process to give the Tom Bradys of the world a plan for their improvement,” he said. “Can’t we package up that process and build technology to make it accessible via cellphone for any kid?”

Mustard announced Jan. 18 that it had raised $3.75 million in seed funding to expand the functionality of its coaching platform, which is currently available for baseball only. Collis said the goal is to create versions of the app that can be used by athletes training in football, golf and soccer as well.

The company has raised a total of $6 million since launching in 2019, attracting investment from numerous influential people and organizations in the sports world — including former quarterback Drew Brees, baseball Hall of Famer Nolan Ryan and the players associations for Major League Soccer and the U.S. Women’s National Soccer Team.

Collis said the latest round of investment will also help to expand the app’s mental performance training features, which are being crafted under the supervision of veteran coach Jason Goldsmith, who is also one of the company’s co-founders.
As the company grows and expands the scope of its app, Collis said, opportunities to monetize the technology developed by Mustard will begin to fall into place.

Right now, Mustard’s coaching features are free for all users. Collis said premium and subscription features will eventually be added, and these will serve as the company’s primary revenue source. Still, he said, it’s important that the app’s basic features remain available free of charge to anyone in need of feedback.

“The mission of the company is to help kids play sports for longer than they otherwise would,” he said. “So, it’s really important to us to keep a robust, free version of all our applications.”